A Yes Day Experiment – How Would Your Family Do?

It’s official, we’ve survived our first Yes Day.  Just a few years late…I still don’t know how I missed this book and now in 2021 there’s a Yes Day movie!  I know you were expecting a make-up free selfie of myself declaring how much I need coffee, just like Jennifer Garner’s recent yes day experience, but I’m tougher than her.  So tough, that I decided to do a Yes Day experiment and have two Yes Day’s!

If you haven’t got a clue about what a Yes Day is, then start here first.

Our family’s first Yes Day was October 14, which coincided with our local fall festival.  Perfect, I thought, the kids will have a blast doing all of the fall activities, and there won’t be time for the “can we go to Target?” request!  I knew we were going to have a fun day, so I decided to not even tell my kids that we were having a Yes Day.  What?  How could I have a Yes Day and not even tell them?  What’s the point?  Well, that’s why I decided to have two Yes Days.  One without them knowing, and one that they knew of.

Our secret Yes Day actually started the night before while we ate out at the local pizza place.  The kids looked across the street at the almost empty parking lot at the bowling alley, and asked if we could go bowling.  Yes, we can!  We’ve all been bowling before, but never together, and never under disco lights.  When did bowling alleys starting doing that?  So, the kids were beyond happy to be bowling, and you know what we ended up doing the next weekend?  Yep, going bowling! 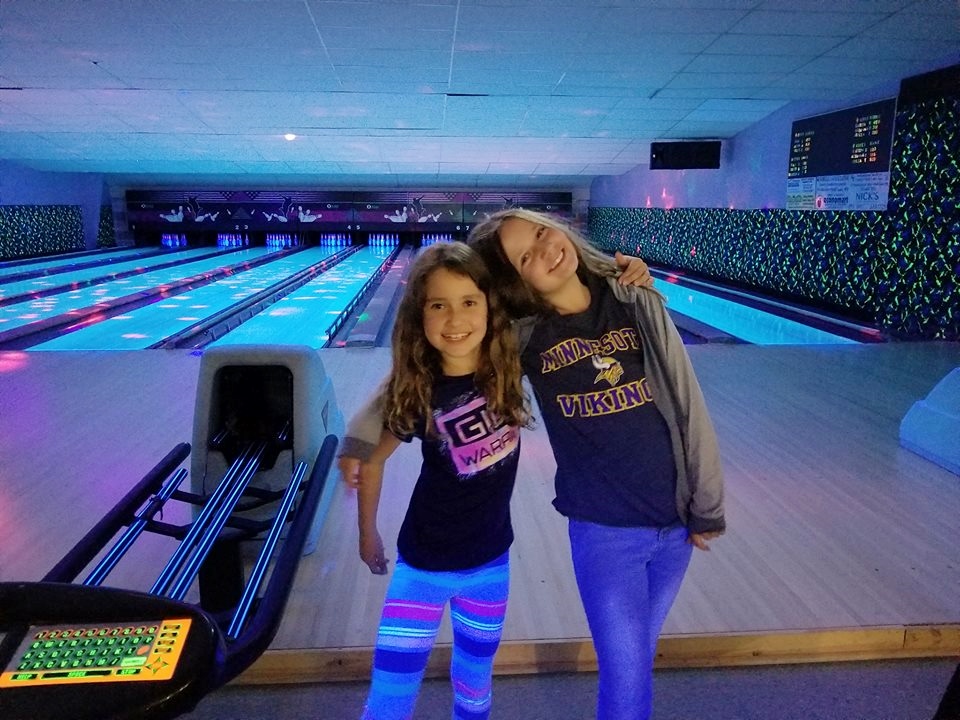 Our first bowling night! Good thing there weren’t many witnesses!

My youngest woke up first on the Yes Day and asked if she could open up a box of Lucky Charms for breakfast.  “Yes, you can” I said, and she was off to a good day!  The rest of the morning was pretty easy, since there were no more questions.  This Yes Day business is pretty okay!

After lunch we headed to town for the fall festival.  The kids did their usual crafts, pumpkin roll, and bouncy houses.  We decided to walk up and down main street for a break, and the first thing they wanted to do was stop for ice cream.  Of course, who was I to say no to ice cream?  We had some gift cards to use and enjoyed our treat.

After the ice cream, we went next door and did some shopping.  The kids each asked for one item, and the prices were reasonable.  Should I mention that one item was “unicorn snot”?  Yes, I bought unicorn snot on our Yes Day.  Top that mama’s!  To redeem myself, the other item was an educational puzzle for my oldest kid.

Look, there’s the new store in town, lets stop in!  Ok!  Can we go to the local organic foods store?  Yes!  This response got a fist pump from my oldest and a yes!  At the organic foods store, my oldest asked if we could drive by the business that makes the delicious chocolates we were looking at.  So we punched in the address in Google maps, and off we went to explore a new part of town.

The Yes Day ended with me doing the random things that they asked for help with, and a late night of watching tv.  The kids had a good day, and I think it wouldn’t have been as good if they had known we were having a Yes Day.

The result of the secret Yes Day – I survived and everyone was happy.

Explaining the Yes Day Experiment to the Kids

Last week, and after I had said “no” to something, my youngest said that “there should be a day when kids can do whatever they want”!  “Well, there is, and it’s called a Yes Day,” I said.  They couldn’t believe it!  I told them that we actually just had a Yes Day, they just didn’t know it.  “You should have told us about it,” they yelled!  I informed them we were going to have another Yes Day, and that it was going to be that very next Saturday when we went to Minneapolis.

I explained what the guidelines were going to be for spending money, and that they had to be reasonable in their requests.  They agreed, and then my youngest asked for a hamster.

I woke up and thought, this is it….I’m about to experience a very good Yes Day or a very very bad Yes Day.  Since we were leaving for Minneapolis that morning, there weren’t any crazy requests.  Actually, there were no requests.  I finally asked the kids if they wanted to eat at McDonald’s for breakfast on our way to Minneapolis.  Of course, they said yes!  This Yes Day is off to a mixed up start.

After breakfast, the requests started coming in.  “Can we get a trampoline?” “Can we get a swimming pool?”  I didn’t say no, I just told them that they needed to be realistic in what they were asking for.  Well, that was the end of their hopes and dreams for the day.

In Minneapolis, we were attending the Star Tribune Vacation and Travel Experience, which luckily didn’t involve spending a lot of money.  The kids were perfectly happy with the luggage tags, posters, candy, and travel toys that they picked up from a lot of the vendors.  My oldest did ask to take one of the Segways for a spin, and I happily said yes (since they weren’t for sale).  Turns out she is an expert Segway driver and is ready to try one out on a tour in the real world.

Yes, you can ride a segway!

We stopped at Trader Joe’s on our way home, and I just knew they were going to be asking for some goodies.  Surprisingly, my youngest just wanted some flowers, and they both wanted the Thanksgiving turkey kit.  That was it, not too bad right? 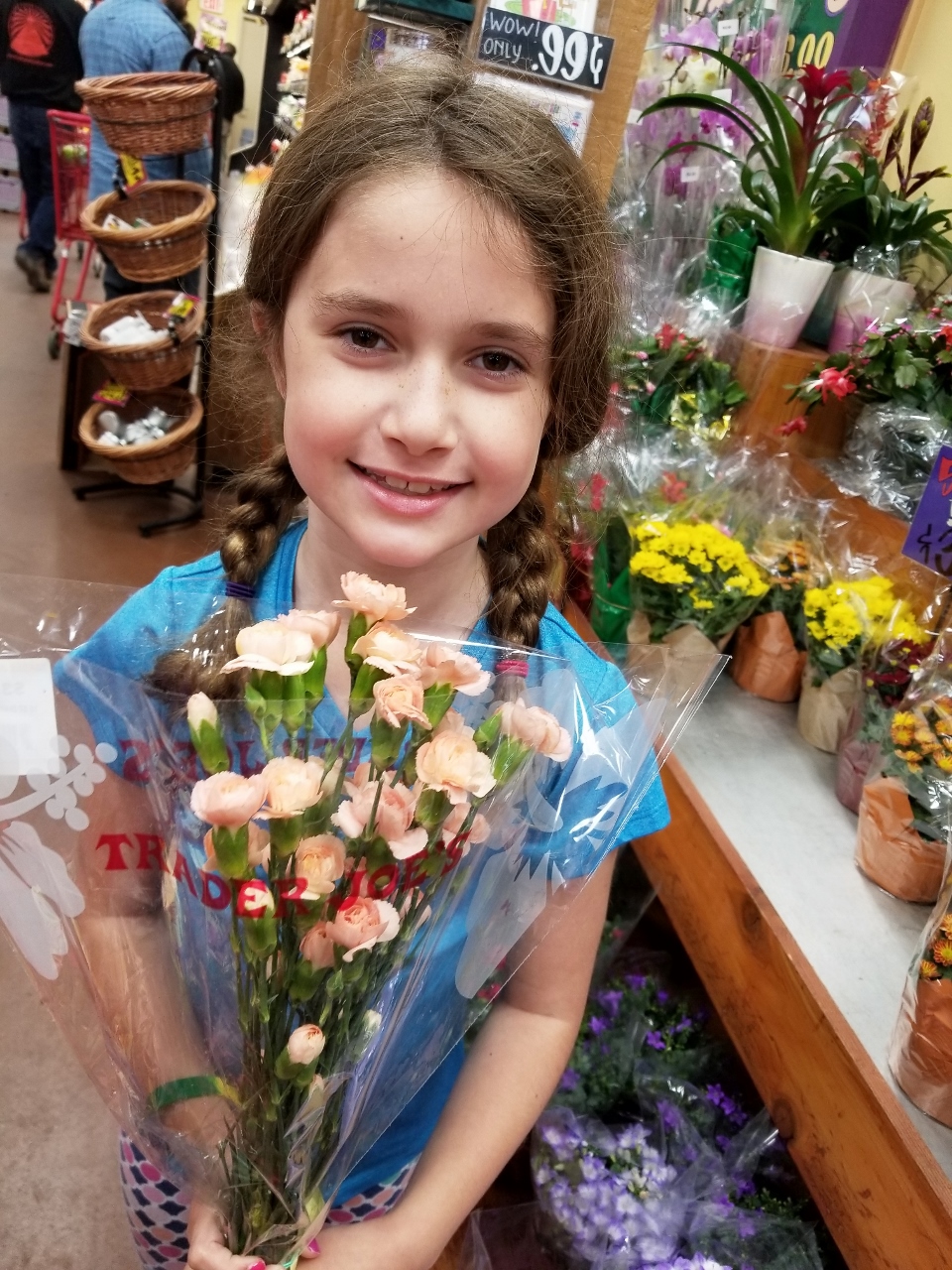 The Yes Day purchase that will make everyone happy.

We made one more stop where my oldest loaded up on her favorite ham and cheddar meat sticks, which she will be sharing with the rest of us.  That was the end of the shopping, not bad huh?  I don’t know how I managed to avoid Target and Toys R Us on a Yes Day, but I did!  No one asked for a horse, pony, or puppy either!

Our Yes Day ended with ice cream and a late bedtime, but everyone was happy.  No selfies, begging for coffee, necessary.

Which Yes Day Experiment Had the Best Results?

I’d have to say the Yes Day that the kids were not aware of was a better day.  They were genuinely happy when I said yes to their request, and there were many more smiles.  Will I do this again?  Sure, I’ll try to have a Yes Day here and there, even if they ask for one.  Who am I to say no?