In Wisconsin, we know that summer is on its way once baseball season starts!  Although the first outdoor games are a little cool in some of the Midwest’s ballparks, we know we have a long season ahead of us to catch a game or two.  Thinking about attending a Milwaukee Brewers baseball game at American Family Field?  Of course you are!  Baseball is America’s past time, and a fun way to spend an evening in Wisconsin.  What’s better than beer, brats, and baseball right?  Well, maybe some peanuts and cracker jack?  Whether this is your family’s first major league game, or you’re trying to attend a game at all of America’s ballparks, you’ll want to read these tips for your first trip to a Milwaukee Brewers game.

What to Do Before Game Day at American Family Field

Download the Major League Baseball Ballpark app and select American Family Field.  You can view the American Family Field’s food and drink offerings and what sections they are sold in.  You can also enter the section where you will be sitting, and the app will locate the closest vendors for the foods you’re craving.

To make the most out of game day, you’ll want to tailgate out in the parking lot before the game.  The tailgating lots are preferred parking, and gets you a little closer to the stadium.  When the weather is nice, tailgating is a fun party!  Plus, you’ll save some money by filling up on your own brats and hot dogs instead of buying the much more expensive ones sold inside the stadium during the game.

If you plan to tailgate, read the tailgating rules on the Milwaukee Brewer website. 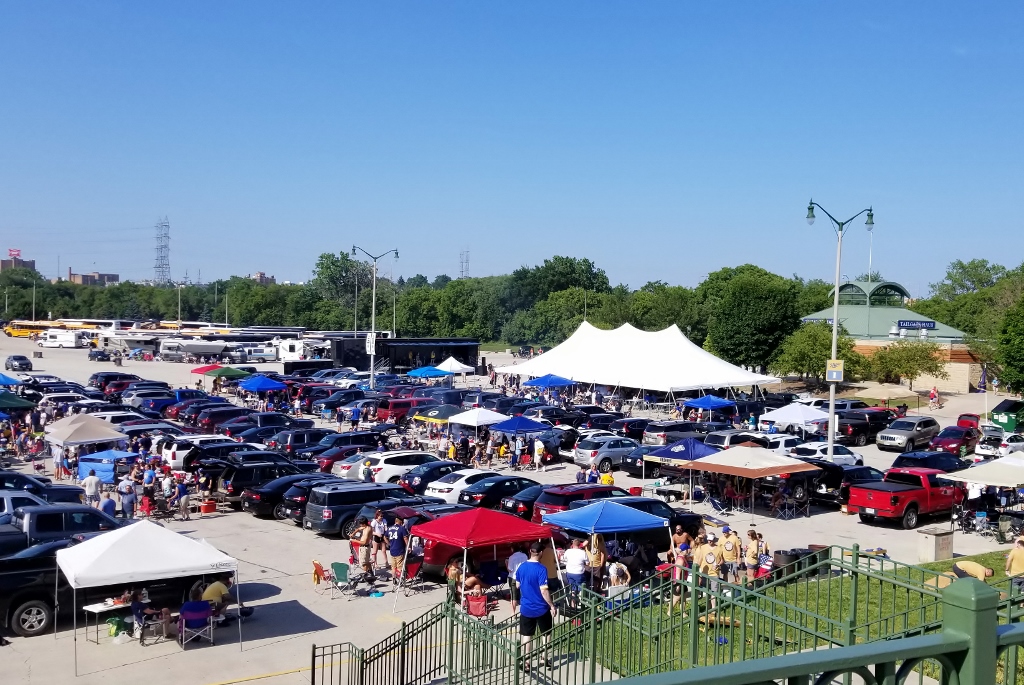 Tailgating at the ballpark

Read thru the American Family Field A to Z Guide on the website.

Check the promotions schedule for your game…you may get an extra bonus for arriving early!

Buy your Milwaukee Brewers shirts and hats before you arrive at the stadium.  The prices will definitely be cheaper, and the shops at the stadium get crowded with long checkout lines.

Buy your parking passes online for a discount.

Tips for your Arrival to American Family Field – Parking, Traffic, and Security

The stadium doors open 90 minutes before game time.  They open even earlier for opening day.

Traffic will really back up on those weekend game days, so arrive as early as you can. 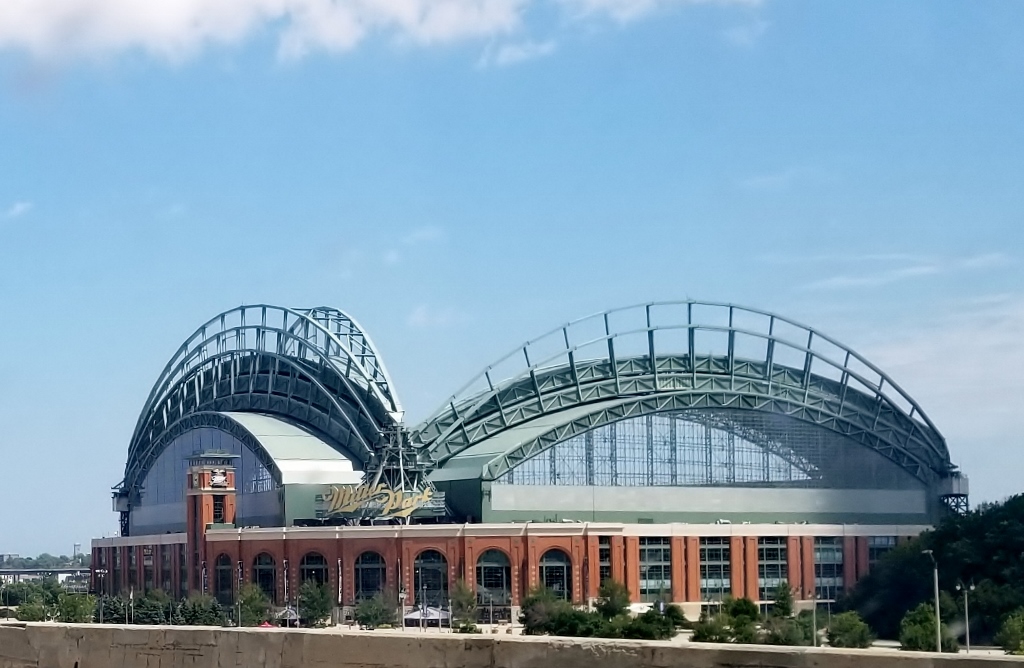 If arriving via I-94, follow the signs to American Family Field.  After you exit, the stadium signs direct you to preferred or general parking.  Once you arrive on the stadium grounds, there are also people directing you where to drive and park.

If you are watching the Brewers host the Cubs, parking fees follow the weekend game pricing regardless of the day of the week it is.

Game day parking can be purchased with cash or credit card.

The lines at security can get long, so try to arrive as early as possible.

Take the express security lane if you aren’t bringing in any bags. 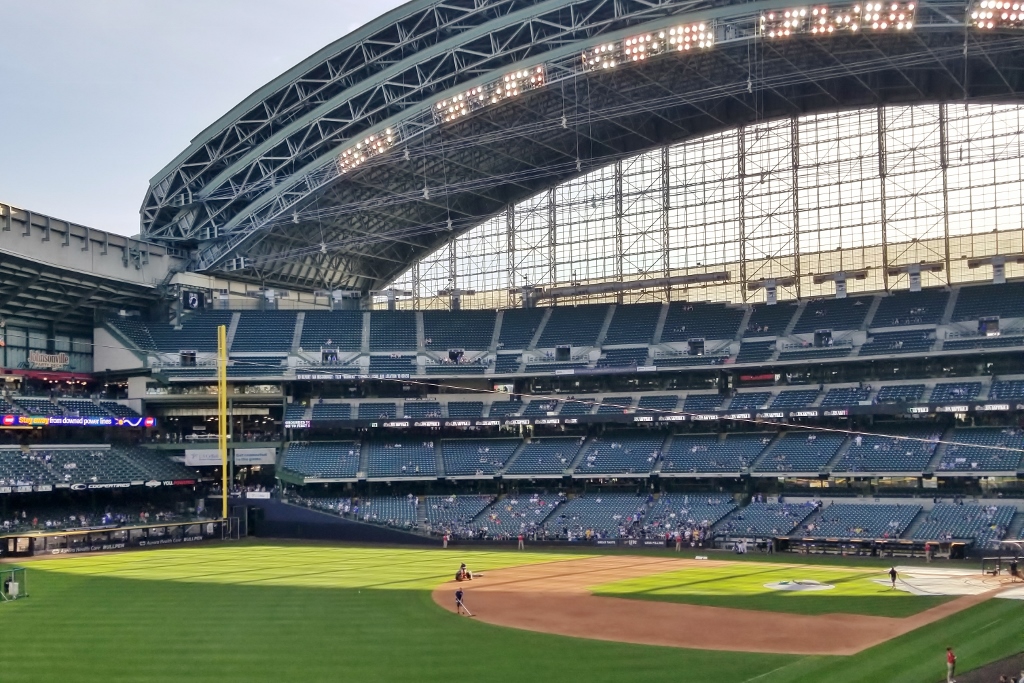 Your game ticket will be scanned right after you pass through security.

You can carry in factory sealed plastic bottles of water, juice, and soda.  Take advantage of this to potentially save a lot of money.

Hard sided coolers are not allowed inside.

Food can be carried into the park as long as it’s “personal sized and in a container”…per their website.

The maximum dimensions for bags/purses is 16” x 16” x 8”.  Starting with the 2020 season, backpacks and multi compartment bags will not be allowed.

Have to get from the first level of the stadium, to the second level?  Take the escalator, because walking the ramps takes forever.

Tips for Game Time at a Milwaukee Brewers Game

If you arrive during batting practice, head to left field to try and catch a few home runs.

Don’t miss the Johnsonville sausage race that takes place during the game.  Five people in sausage costumes, race from 3rd base, to home plate, and then finish at first base.  This happens in the middle of the sixth inning.

Walk around the first level to see the exhibits or to get your picture taken with one of the racing sausages.  You’ll see what I mean. 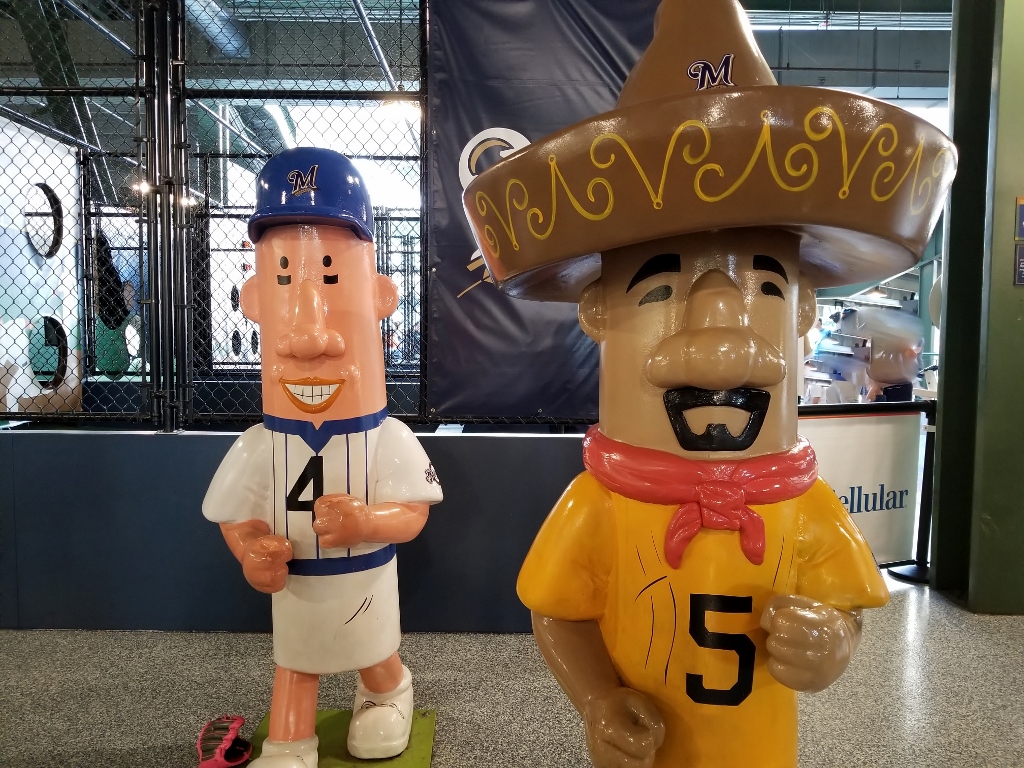 We were cheering for Chorizo.

Have you heard about the yellow slide at American Family Field?  Every time a Brewer hits a home run, Bernie Brewer (the mascot) slides down the slide and fireworks go off.  He also does this after a Brewers win.

Jealous of Bernie Brewer on the slide?  Your group can ride down the slide before the game, if you have some $$$ and sign up ahead of time.

For those summer evening games, you may be sitting in the sun in some sections until sunset.  Bring a hat or sunglasses.

There are charging stations on each level of the stadium.

First time visitors to American Family Field can get a “first game” certificate at the Brewers Guest Relations kiosks.

The Brewers’ stadium has a retractable roof, you’ll be watching baseball rain or shine.

Each stadium in the US has something unique, and American Family Field is no exception.  Here are a few things to look for while you are there: Bob Uecker’s last row statue, autograph alley, Hank Aaron’s 755th home run plaque, and the Miller Park walk of fame.

If you’ve never eaten a brat in Wisconsin, you need to eat one at a Milwaukee Brewers baseball game.  The beer cheese brats are our favorites.  Don’t forget the secret stadium sauce! 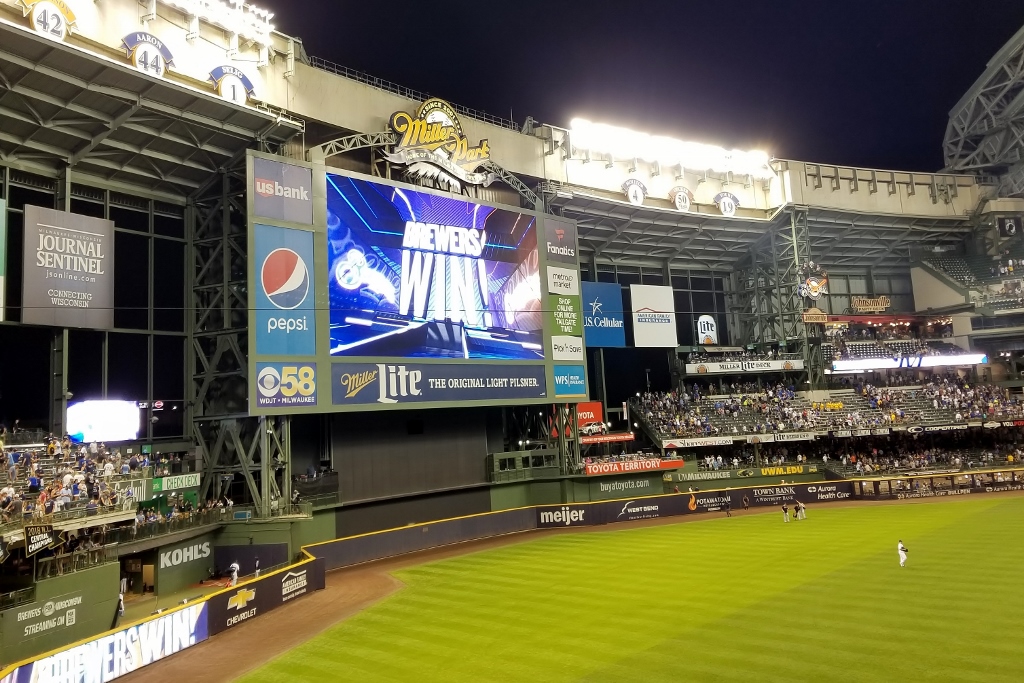 After the game, we left the parking lot and headed to I-94 east.  Literally, three minutes passed from when we left our parking spot (preferred parking) to when we were cruising down 94.  That was fast!

Enjoy the game, cheer on the Brewers, and eat a brat for me!