Sit down to a plate of pancakes, grab that maple syrup bottle, and pour it on.  Most kids probably don’t know how real maple syrup is made, what’s really in that imitation syrup, or who is Aunt Jemima anyways?  Would it be cool or gross knowing that the syrup on your pancakes came from a tree?

I don’t know how it happened, but last year my husband decided that he was going to make maple syrup this spring. This process can be as simple as collecting the sap and cooking it on the kitchen stove, or can be more complex where you need to build your own sugar shack.  So guess what my husband did…yep…sugar shack.

The shack was built last summer, and the equipment was purchased over the winter.  Now he just had to wait for spring and the sap to start running.

This winter was very mild for us in Wisconsin and we had some warm days in early March.  Now he had to decide if he was going to tap the trees or not.  I’ve learned that the sap runs when the days are warm and the nights are below freezing.

He decided to tap the trees and see what happened. 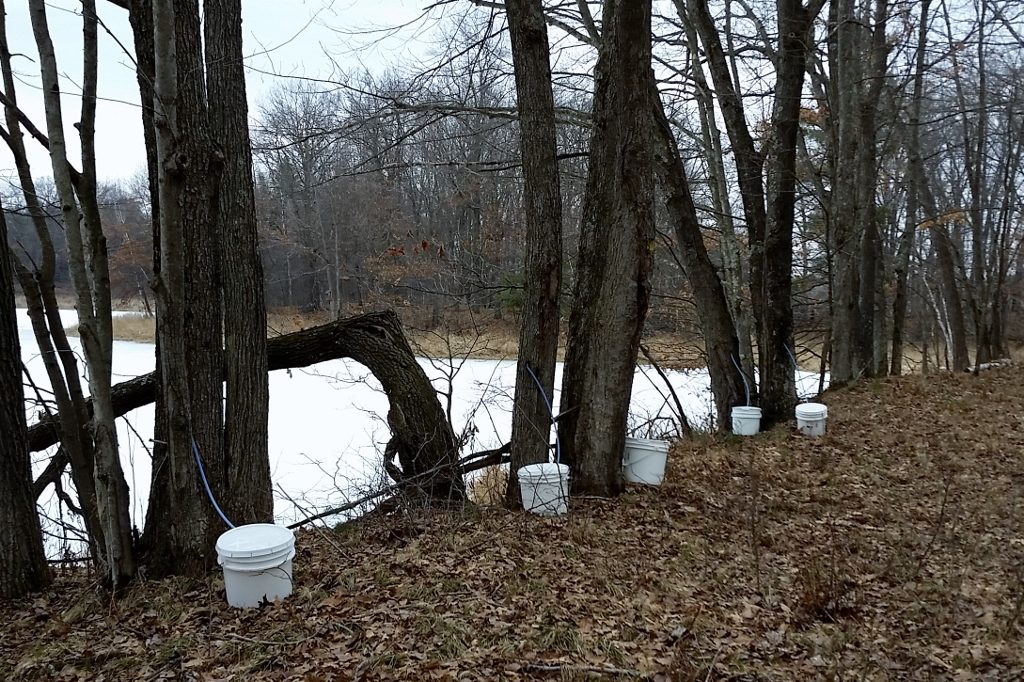 This is just a few of the maple trees that we tapped.

The sap started to run right away.  During the cooler days there was less sap, but those trees really produced once it warmed up.  We had about 50 trees tapped and the kids had fun checking the buckets for sap and helping with the sap collection.

Once we collected about 60 gallons of sap, it was time to start the boiling.  Those 60 gallons of sap had to be boiled down to between 1-2 gallons.  We boiled the sap over a woodstove, so add in the labor of cutting firewood to this whole process. 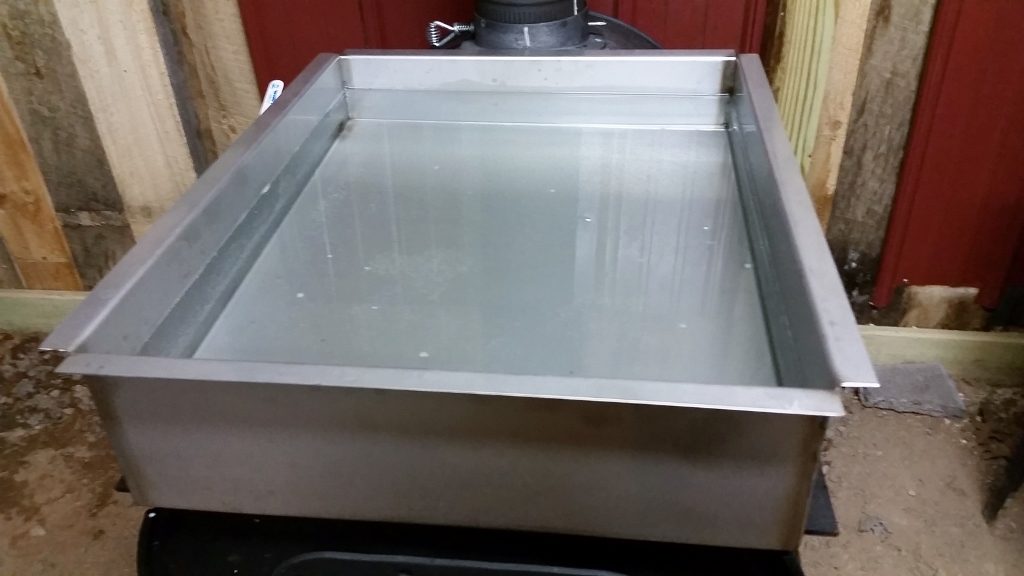 The sap is ready to be boiled. There’s no sweetness or even any flavor at this point.

It took about 2 days to boil down the sap. Over those 2 days, it was fun to taste the sap to see how the flavor developed.  It also smelled pretty good inside that sugar shack. 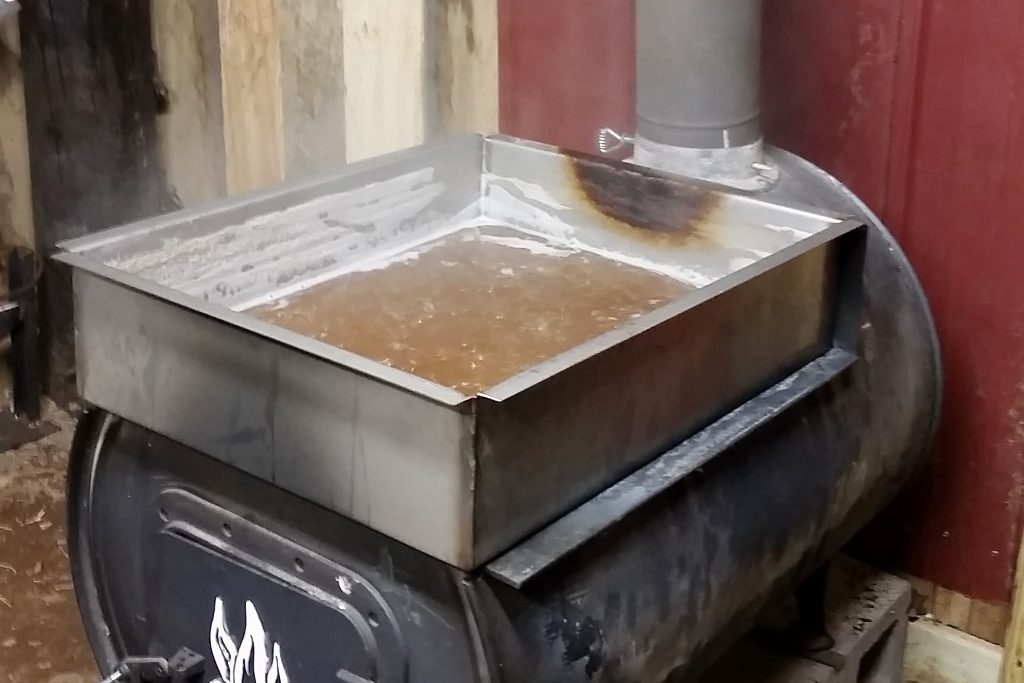 2 days later. Finally ready for the final boil and to bottle.

Once the syrup was boiled down, it gets filtered.  Then it’s time for the final boil.  Once the syrup reaches that certain temperature, it’s time to bottle.  The bottles are sealed and left to cool.  It’s also interesting to note that you get a lighter colored syrup early in the season.  Our final production of syrup this season was the darkest, and most resembled what you get in the grocery store. 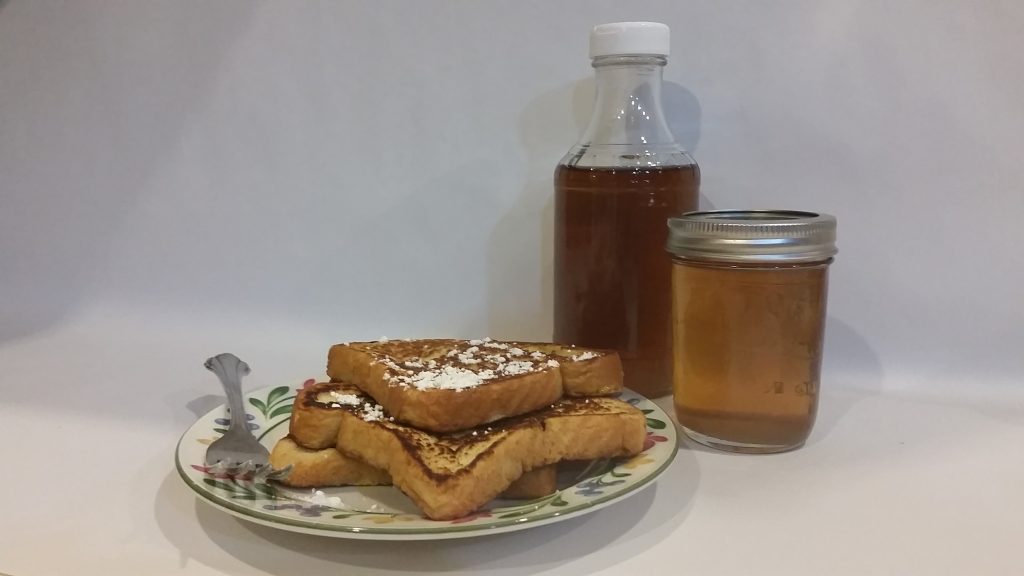 Notice the color difference. The small jar is the second run and the tall bottle is the third run.

This was a fun learning experience for the whole family, and something we’ll continue to do each spring.  The kids helped throughout the process from tree tapping time to the final bottling.

While I don’t recommend everyone go out and do this, you may be able to visit a maple syrup producer in your area for a tour.  Top producing states are Vermont, New York, Maine, Wisconsin, Michigan, Ohio and New Hampshire. Or just spend a few extra bucks and buy that jug of homemade maple syrup the next time you are at the grocery store.

The next time you make pancakes, do a little taste test.  Compare the flavor, color, and consistency of homemade to imitation.  Which do you like the best?